Another cold snowy day, another bowl of stick to your ribs goodness. When it’s freezing outside there is nothing better than a hearty bowl of Poblano Corn Chowder. The heat from the chili’s and the sweet corn are the perfect combination. Garnish with a sliced green onion and a bit of cilantro and dig into a soup that will warm you to your toes.

This soup comes together in about 45 minutes and in my house it’s a pantry staple as I almost always have the ingredients on hand.

I have grown to love Poblano Peppers. They’re the mild cousin to Jalapenos and they add such a wonderful flavor to soups, stews and sauces. The great thing about them is that like Jalapenos you can freeze them. Yep that’s right, take them straight from the store to a zip lock bag and pop them in the freezer. Then, when you want one, take it out, run it under some warm water for a minute or so and dice. They’re a wonderful freezer staple to keep on hand for when ever the mood strikes you. So much better than canned chilies, the flavor doesn’t even begin to compare.

Like Jalapenos, Poblano peppers can and will vary in heat. We had friends over for dinner a year or so ago and the husband made Jalapeno poppers. His wife and I took one bite and started coughing. They were so hot we simply couldn’t eat them. I swear they were the hottest jalapenos I had ever had. So remember, when working with Poblano’s to take a taste of the pepper before you start cooking so you know what you’re getting yourself into. This time around my Poblano was very mild. So much so that I added a pinch of chili flakes to give my soup a bit more kick. Sometimes I get one that is pretty hot and end up using only half the pepper instead of the whole thing. So, give it a taste and use your own judgement. 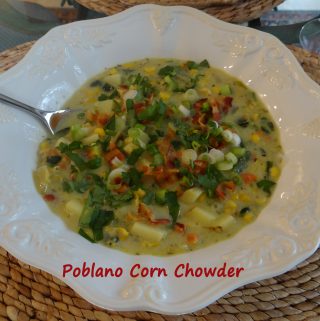