Our friends the “Millers” came up to St Louis last week for their annual “Christmas Shopping Trip.” It’s always good to see them as we have been friends since almost the beginning of time. I was trying to come up with something unusual to fix for them and thought of this one. I’ve made it several times over the years and it’s always a crowd pleaser.

A traditional Cassoulet is a time consuming prospect that can take the better part of a day to complete, not something you pull off on the spur of the moment. Several years ago I was watching Cat Neville on PBS and at the end of her show she prepared this Quick Cassoulet. It looked so good I had to try it. A cassoulet that can be ready in a couple of hours, sounded to good to be true but I gave it a shot and fixed up a batch. I pulled up her recipe online and made it just the way she did. It was really good, but I found that it had way to much liquid for my liking and decided to cut back on that and substitute sun dried tomatoes for the can of diced tomatoes. I also substituted fennel bulb for the celery and added some extra herbs and spices.

I have to give a shout out to Jacques Pepin for the next change I made to this recipe. I was watching him one day as he was braising some chicken thighs. He began to pull the skin off the thighs because as we all know when you braise chicken the skin gets rubbery and yucky. Anyway, he said to take the skin and lay it out on a cookie sheet in a 400 degree oven and let it get nice and crispy, then crumble it up like you would bacon and put it on a salad. I know, it’s a blinding flash of the obvious, but one I that had not occurred to me before. This recipe calls for a layer of panko bread crumbs scattered on top for the last 30 minutes of cooking time so I took the crumbled up chicken skin and added it to the bread crumbs for some extra flavor and crunch and instead of using butter to coat them so they would brown I used that lovely chicken fat that was left over after cooking the skin.

I know what your thinking this recipe is a heart attack on a plate they way I make it, but I only do once a year or so and you have to be able to live a little once in a while or life is no fun.

Jerry was happy to dig into it with a good bottle of RED and at the end of the evening there was nothing left on his plate but a thigh bone.

This is a wonderfully hearty meal that is just perfect for a cold winters night. It’s stick to your ribs good. 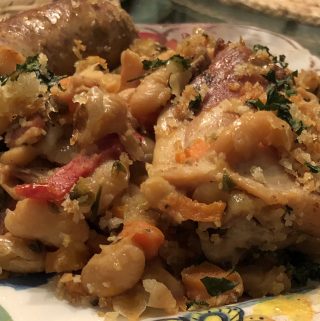