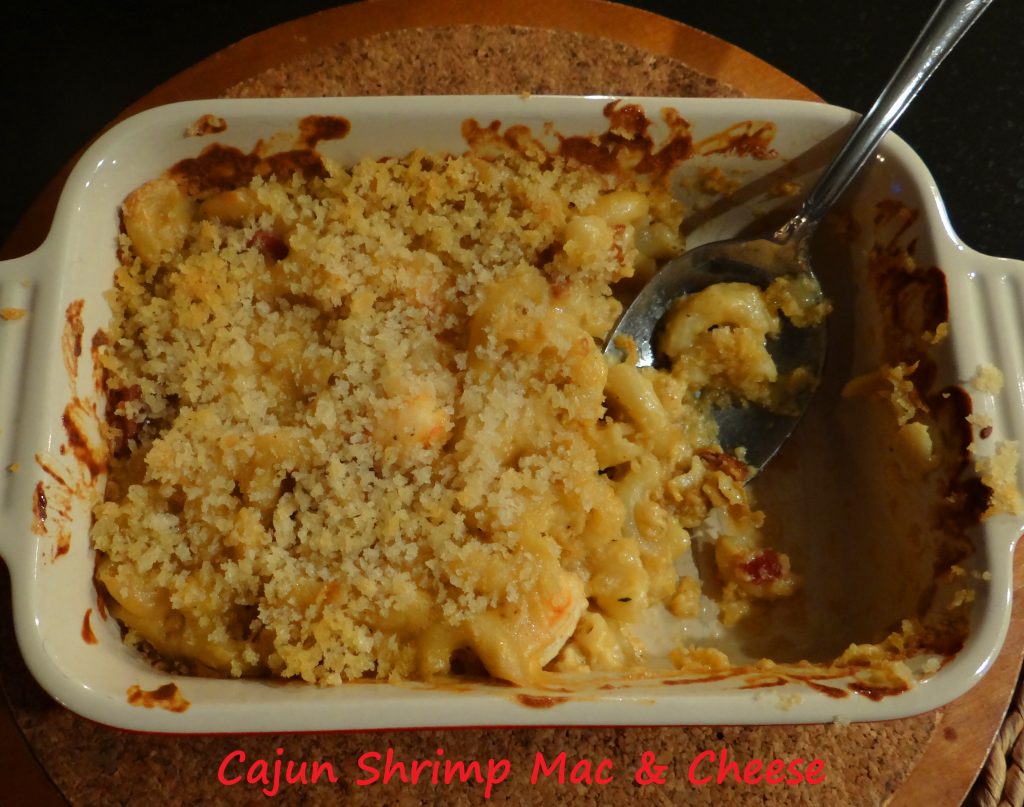 I have a new Grand baby that”s due this week so I have been in the kitchen cooking up family favorites to freeze and take to the kids so that when they are home with the new baby all they have to do pop one in the oven and dinner is ready. I had already made their favorites, Tuna Noodle, Jambalaya, and Italian Beef, but I wanted something new and different to add to the rotation.

We were all in New York a couple of weeks ago for my nephew’s wedding and my son was raving about the Lobster Mac and Cheese he had at this little restaurant in Brooklyn. He just loves this kind of stuff and I thought it sounded good and different. At the same time I also thought Lobster, not on my budget, but I could do something good with Shrimp. That is how I came up with Cajun Shrimp Mac and Cheese.

Once again I turned to my tried and true ingredients. Paul Prudhomme’s Seafood Magic and the seasonings from Aunt Marie’s Cheese Grits. When I find a really good flavor combination that works I have a tendency to use it over and over again in different variations and this recipe is a perfect example of this.  I already have a good feeling for what it is going to taste like and I know it will be good, I just switch things up a bit.

This recipe has too many steps for an easy week night meal but it would be great for a Sunday dinner or for company. The steps are worth it as the level of flavors and textures are what make it so good. You get the rich cheese sauce, the crispy salty bacon, the spicy shrimp and the crunchy buttery bread crumbs on top, it’s absolute heaven. The text I sent to my son after I sampled what I made for myself was, a picture and  “OMG!!!! You are going to love this!” 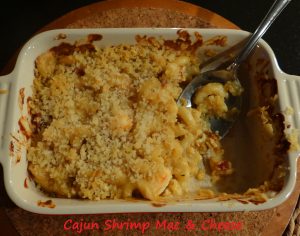 For the cheese sauce:

For the Shrimp and Bacon and Macaroni:

Slice the bacon in 1/4 in strips and cook on med low heat until crispy, drain on a paper towel and set aside. This will take about 10 minutes. You want to cook it low and slow so it gets crispy but doesn't burn. You want to make sure and get it good and crispy because it will soften up in the sauce and if you don't it will get soggy and no one likes soggy bacon.

Season the shrimp with the Seafood Magic and place on a sheet pan under the broiler on high for 3 minutes per side. You may want to cut them in half depending on the size of shrimp you use. I used 31-35 count per pound and I cut them in half.  You just want to barely cook them so that the spice adheres to them well but you don't want them over cooked. Take out of the oven and set aside.

Get your water boiling and cook the macaroni, when done drain in a colander and set aside. While the macaroni is cooking start your sauce.

In a sauce melt the butter then add the flour. Stir well and let it cook for a minute to get the raw taste out of the flour. Stir in the milk and chicken broth and simmer until it starts to thicken up, then add the Worcestershire sauce, Lawry's season salt, garlic and A1 and mix well. Add the cheese and stir well in incorporate. The sauce will seem to be thinner than than you think it should be and that is okay it will thicken up more in the oven.

Can be made ahead, just give it more time in the oven if it's cold going in.