If I had known how easy Lobster Bisque is to make I would have been making it for years.

I just love really good Lobster Bisque and order it out just about anytime I see it on a menu. For years I thought, one of these days I’ll keep the shells from the lobster, boil them down to make stock and I’ll make Lobster Bisque. Ya right, who am I kidding. I never saved the shells because I knew I would never take the time to boil them down, press them through a sieve, strain the liquid and cook it some more.

Then I found “Better than Bouillon” Lobster Base.

This stuff is amazing, just add water and you have stock. It doesn’t get much easier than that. Now, having said that this stuff can be very hard to find in grocery stores. There is one little market on “The Hill” in St Louis that carries it but it’s the only place in the city that I have found it. I have found it on Amazon. It’s about $7 a jar and it will last for up to a year in the fridge, so it’s worth the money.

I bought some of this several years ago to make a lobster sauce for pasta but for some unexplainable reason I never thought to use it to make a bisque until yesterday. My husband wanted soup for dinner again and I was in the mood for something a bit more exotic than chicken noodle. I knew I had some of the lobster base in the fridge so I started googling to find a recipe.

I looked at several that of course required you to make a stock from the lobster shells. Well, we know that was not going to happen but the rest of the ingredients for the soup looked good. I basically used a couple of different recipes and interchanged the ingredients to come up with the taste I was looking for.

Then it was time to start cooking. The Lobster Bisque came together in about 30 minutes and it was everything I hoped it would be. Every bit as good as any I had ordered in a restaurant. 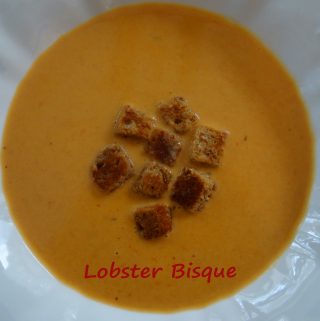